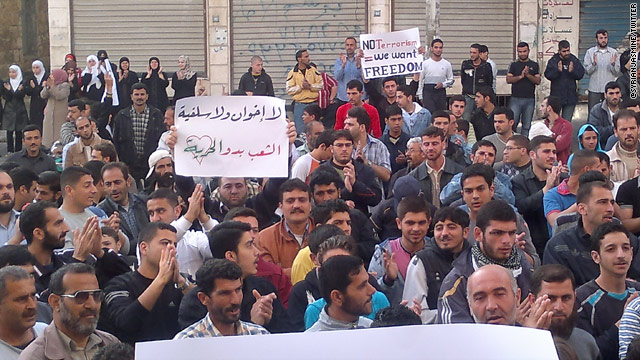 Syrians have little confidence that President Bashar al-Assad's regime can solve the country's current problems, although they are optimistic about the future, a poll conducted by Pepperdine University shows.

The survey, which was conducted in conjunction with the Democracy Council of California, also found that eight out of 10 Syrians questioned want al-Assad's regime to leave power and more than seven out of 10 are more hopeful that reforms will come, in light of the uprisings in other Middle Eastern and North African countries now known as the Arab Spring.

The Democracy Council is a nonpartisan, non-profit group that promotes democracy in emerging countries. The group receives funding from the U.S. government agency USAID, although the Syria poll was not commissioned by the government. CNN obtained a copy of the survey, which will be released Wednesday.

The poll was conducted in secret due to a Syrian government ban on opinion-gathering, officials from both organizations told CNN.

"The most surprising thing about these results is that they could be collected in the first place," Angela Hawken, associate professor of Economics and Policy Analysis at Pepperdine's School of Public Policy, told CNN.

The results are the product of face-to-face interviews in Arabic by trained data collectors with 551 Syrians over the age of 18. The poll was carried out between August 24 and September 2, Hawken said.

She explained that the tense security situation in Syria, coupled with the fact that the poll was done without the permission of the government, presented many logistical challenges for the field team collecting the data. For example, she said, the team had particular difficulty interviewing women, who were less willing than men to participate. Those women who did answer the questions were less critical of the government.

"Those who agreed to answer a poll conducted without government approval may be more likely to express anti-government sentiments than their neighbors who refused," Hawken said, adding that it was hard to tell how representative the numbers were of overall public opinion in Syria.

"Still, we know a lot more now than we did before the survey," she said. "And, equally important, we have shown that it is possible to collect public opinion data even in very repressive countries."

Democracy Council President James Prince said the poll reflects "the deep-seated angst felt by most Syrians" about the regime and their hopes that the Arab Spring will result in better leadership in Syria.

"The Syrian people do not have confidence in the Assad regime. They no longer want to live in the Baath security state," Prince told CNN. "As in other regional countries, the Syrians are fed up with the corruption, nepotism and lack of opportunity in Syria. The people are searching for alternatives to Assad."

Despite their discontent with their government, Syrians remain optimistic, the survey found, with nine in 10 expecting the future to be better than the present.

Prince noted that the findings of the survey are consistent with polling in other countries involved in the Arab Spring, such as Tunisia and Egypt, with corruption and the lack of freedom and opportunity in people's lives driving them to look for alternatives to their government. He points to the fact that 78.3% of the Syrians surveyed feel more hopeful about the prospect for reforms in their country in light of popular movements elsewhere in the Arab world.

Prince, a leading expert on Arab civil society, has been working on democracy promotion in the Middle East for more than 20 years.

He said the poll showed that the Syrian public "has very little confidence in the Assad regime and the government in general."

A little more than 86% of the respondents judge al-Assad's performance negatively, and 88.2% do not think the current government is capable of solving the country's problems, Prince explained.

The results of the survey come as world pressure intensifies against the Syrian regime, with the imposition of more international sanctions and a renewed call by a United Nations body to bring in the International Criminal Court.

Unrest has plagued Syria for more than six months, as protesters demanding more freedom, democratic elections and an end to al-Assad's regime have been met by brute force. The government has maintained a consistent narrative: It is going after armed terrorists, who are the ones causing the problems. But opposition activists say the regime is behind a systematic, sustained slaughter of protesters and innocent civilians.

The poll found most of the Syrians questioned - 71.1% - had positive views of the protesters, and only 5.5% had negative views. A whopping 88% think that the majority of the population shares the protestors' concerns.

Two-thirds of the respondents agree that "democracy is preferable to any other form of government." But the survey found that mere reforms by the Assad regime will not placate the Syrian people. Only 11.5% want the regime to remain power and make reforms, while 87.9% think that reforms will not satisfy the protestors and 81.7% want regime change.