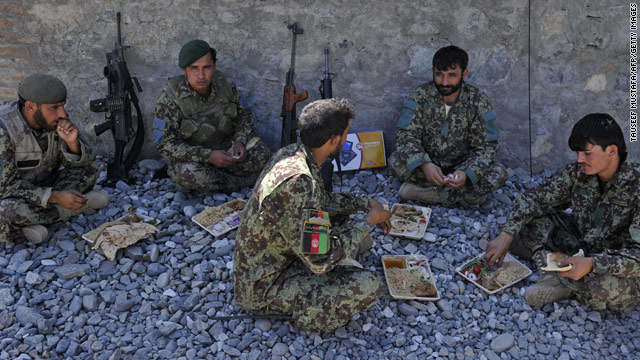 A 'boots on' approach to quality control in Afghanistan

But the three-star commander of the NATO training mission is willing to walk in the boots of his Afghanistan allies – literally.

Caldwell said the NATO allies went looking for ways to save money teaching and equipping the Afghanistan security forces.

"We asked ourselves, why are we buying boots from the United States for this, hundreds of thousands of men?" Lt. Gen. Caldwell said from Kabul.

"And each boot was about $170, a pair of boots, by the time we got them there and issued them out," Caldwell said.

So under the "Afghan First" initiative started by NATO 18 months ago, Caldwell's team found a local company that could provide the right boot at a third of the cost.

The general was told they would meet the specification - but he is making sure.

"I can tell you, I personally know," Caldwell said in a video-link to journalists at the Pentagon. "I wear a pair of Afghan boots, have been now for seven months, because I needed to personally validate for myself it really is good."

The U.S. and its allies hope the Afghanistan security forces will grow to 352,000 by November next year. But already local boots as well as other locally manufactured uniforms and other supplies have generated savings. "Our estimate is that today alone we have saved over $650-millon that we had programmed to spend, same quantity, same quality," Caldwell said.

Members of Congress have criticized the U.S. military for creating an Afghaistan military that will be too expensive for the country ever to sustain on its own, at an estimated annual cost of $6-billion to be provided by the U.S. and allies.

Caldwell suggested that other savings can be found by turning up the temperature, or at least not always providing air conditioning when the U.S. builds facilities for Afghanistan forces. "Today we don't do that all," said Caldwell. "We put in fans."

"We've recognized what's right for Afghanistan, what's affordable and sustainable by them for the long term," he said.

Despite the efforts by the U.S. and dozens of other countries to train the local forces, Caldwell said they may need additional help even after the scheduled U.S. troop withdrawal at the end of 2014.

"In December 2014 when Afghans take the led for security here in Afghanistan there will still be coalition enablers here," Caldwell said.

Later Pentagon spokesman George Little said he could not give any information about how or who those enablers would be several years into the future.

And he said that recent high visibility insurgent attacks in Kabul should not overshadow the advances Afghanistan security forces had made. He said that was especially evident in the September 13 attack on the U.S. Embassy. "As I've watched the response by the security forces here in Kabul the thing I would tell you is they are learning from each incident and they're adapting," Caldwell said. "They're getting better each and every time.

This most recent attack was probably the most vivid example I saw in terms of how they handled that with a very deliberate, methodical approach."