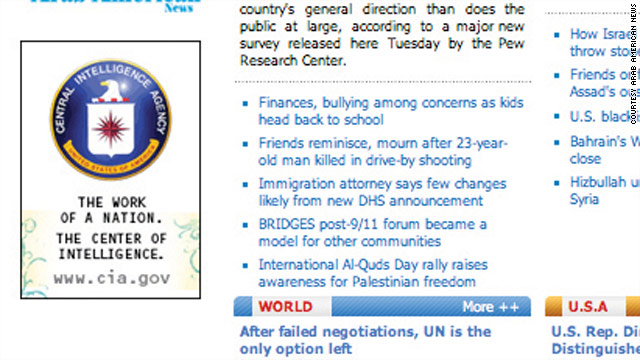 Why did the CIA pull ads from a Muslim paper in Detroit?

It's likely not the kind of public relations within the Muslim community that the CIA was aiming for, but when the Arab American News published a recent wire story that was critical of the agency and some of its believed operations in the community, something strange happened.

"We received an email from the advertising agency which handles the CIA's account," publisher Osama Siblani said.  "The agency sent an email saying that the CIA wanted to remove their ads immediately for undisclosed reasons.  I said 'OK, capture the front page in a picture and let's make the request to the webmaster to remove it.' They would not even wait. They want the ads to be removed immediately without a delay."

The ads seeking linguists interested in working for the agency were undoubtedly strategically placed in the Dearborn, Michigan, newspaper, which serves greater Detroit's Muslim community.

No official explanation was given, though the same article had been published by numerous other news agencies around the world. Siblani smelled a conspiracy and the following week, published his own blistering editorial expressing his discontent.

"If displeasure with one story the newspaper publishes causes a government agency to pull all its ads in retribution, then we assume everyone should be afraid of the CIA - and maybe the whole government - because it's obviously 'my way or the highway' with them. For us they can pull advertising and satisfy their thirst for revenge," Siblani wrote.

Without much explanation, the agency restored the advertising deal within days.

An agency spokesperson issued a statement saying: "The CIA has a long history of advertising with the Arab American News, and we regret any misunderstandings in this instance. We resubmitted our recruitment ads - for linguists - to the outlet. Freedom of the press is one of the many American values that CIA officers work to defend every day."

While the statement doesn't explain how or why the decision to pull the advertising package was made, Siblani says he's turning the other cheek in the name of national security.

"I have to give them the benefit of the doubt. It has to be an act of an individual. I don't want to pick a fight with the agency and I accept that it was a mistake and bad judgment," said Siblani, who says he still harbors frustration over the incident.

"They picked a fight with the wrong guy. I'm the one who brought them into this community."