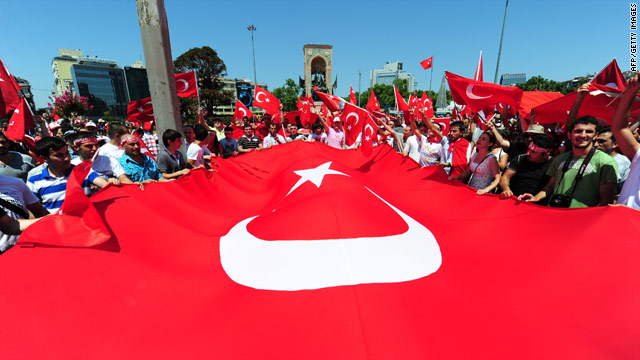 Editor's note: Jon B. Alterman is director and senior fellow of the Middle East Program at the Center for Strategic and International Studies. Prior to joining CSIS, he served as a member of the Policy Planning Staff at the U.S. Department of State and as a special assistant to the assistant secretary of state for Near Eastern affairs. This article was originally published in the CSIS publication "Middle East Notes and Comment" and is republished with permission.

From Jon B. Alterman, CSIS

Saudi Arabia has a problem. Its decades-long alliances with Iraq and Egypt have been sundered, and its faith in U.S. leadership is at its lowest point in memory.  Its regional threats have grown, not only from Iranians directly across the Gulf, but from the actions of Iranian proxies in Lebanon, Syria and elsewhere in the Middle East that endanger Saudi allies.

There is no single answer to Saudi Arabia’s challenges, but the solution set increasingly includes building greater cooperation with Turkey.

Turkey is an unlikely Saudi ally.  A historically secular republic would seem anathema to an avowedly religious monarchy, and Saudis often point with pride to the fact that they never fell under the corrupting thumb of the Ottoman Empire that left its imprint on most of the Middle East.  The Turkish economy is a bottom-up industrial juggernaut; the Saudi economy trickles down oil wealth to its citizens.  Turkey abandoned the fez in the 1920s as part of an aggressive effort to modernize; Saudi Arabia has continued to insist on traditional dress for nationals, albeit with a fondness for fashioning them out of fine European cloths.

Perhaps most problematic is the fact that Turkey has adopted a policy of “zero problems with neighbors” when those neighbors are precisely the countries with which Saudi Arabia has its deepest problems. Iran is chief among them, but so are Syria and Iraq, where Saudis believe events have spun decidedly against their interests.

To hear some Saudis tell it, Iranian fingers are all over everything in the Arab world. Many Saudis see the Shia-led government in Baghdad as an extension of Iranian influence, and they are increasingly alarmed at the rise of Shia interests on the backs of Hezbollah in Lebanon.  Efforts to assert Shia rights in Bahrain are another piece of the puzzle, they argue, with the ultimate goal of extending power into the oil-rich Shia-majority lands of Saudi Arabia’s Eastern Province. While leaving it to the (Sunni) King of Jordan to articulate the view, Saudis see an emerging Shia crescent unfolding in the Middle East, and themselves as the necessary leaders of the Sunni resistance.

Yet, the Sunni resistance lacks the muscle it once had. Gulf Arabs financed Saddam Hussein for a decade in order to keep the Iranians pinned down, but they see Iraq’s current government besieging Iraqi Sunnis, not Iranians. Egypt, with its large population and effective diplomatic service, was once a reliable force multiplier for Saudi interests, but Egypt is very much out of the equation now, being wholly preoccupied with its internal challenges. Morocco is too far away, Jordan is too small, and the others too weak to do the Saudis much good. There are no good alternatives.

This is where Turkey comes in. Populous, Sunni-led, militarily strong, and diplomatically active, Turkey supplies many of the assets for which Saudi Arabia has been searching. Essentially pro-Western but with a strong independent streak, Turkish foreign policy resonates with a Saudi audience. This is especially true on Turkish policy toward Israel, which is increasingly supportive of the Palestinians and critical of Israel. It is a shift that plays as well in Riyadh as it does among Turkish Islamists.

Palestine is not the only area where Turkish and Saudi foreign policies have started to converge. As recently as last winter, senior Saudi officials favored engaging with Bashar al-Asad. They worried aloud that he was “a paper tiger with steel claws,” and his downfall could spell doom for the region. After months of massive street protests drew regime brutality—guided in part by Iranian trainers—Saudi Arabia turned decisively against the Syrian regime, pulling its ambassador from Damascus in early August. The Turkish president traveled to Riyadh a week later for discussions about Syria, and a week after that stated that he had “lost confidence” in the Syrian leadership.

Turkey’s turnaround on Iran has also reassured Riyadh. In May 2010, Turkey had been in the forefront of an effort to find an international compromise with Tehran over its enrichment program, over the objections of a U.S. government that judged the effort naïve and deleterious to growing international consensus to isolate Iran. Turkey is no longer leading a maverick effort at nuclear diplomacy, to what must surely be the relief of Saudi decision makers. Growing tensions over a Turkish decision to host a NATO missile defense system must also come as welcome news.

It is too early to talk of a Turkish-Saudi axis, and Turkey’s commercial interests will never allow the sort of sharp break between Ankara and Tehran that many in Riyadh would seem to favor. Nevertheless, both countries see significant benefits from closer coordination. Saudi Arabia is a large-scale importer of manufactured goods, foodstuffs, and infrastructure, and Turkey is a reliable producer of all three. As Turkey seeks entrée in the Middle East, there can be no greater guide than Saudi Arabia, whose financial might and religious legitimacy get it a hearing throughout the region. Turkey’s audacious diplomacy is very much not in the Saudi style, but that makes some in Riyadh appreciate it even more. In addition, Turkey is clearly rising—militarily, diplomatically and economically—and that makes it an attractive bet for a conservative kingdom.

Growing Turkish-Saudi cooperation is a mixed blessing for the United States. On the one hand, it is likely to tone down some of the Turkish policies that were most problematic for the United States, especially regarding Iran, Syria, and even Iraq. On the other, it is likely to lead to greater U.S.-Turkish conflict over Israel, and an increasing set of instances when Saudi Arabia, Turkey and others in the region set their own course on regional security, with less regard for American preferences. For Americans determined to keep things as they have been, it is a troubling development. In a shifting Middle East, it is one more element of change.