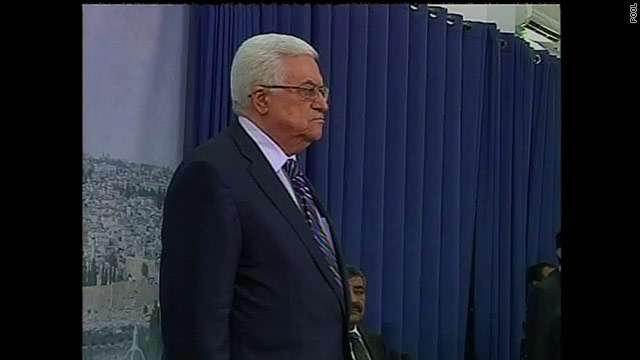 The officials said a package deal could enable Abbas to claim victory by going to the Security Council, but would not force a confrontation with the United States, which has promised to veto any statehood resolution which comes before the Council.

"Just because he sends a letter to the Council doesn't mean there has to be a vote," one senior European diplomat said. "The message we get from the Palestinians is that they definitely want to find a diplomatic solution."

A senior Palestinian official confirmed the idea was being seriously considered as an option which would allow Abbas to make good on his promise to go to the Security Council, but would also help boost efforts to relaunch negotiations.

"It actually is a good idea because it is like a Damocles hanging over our heads," one senior U.S. official said. "It creates an urgency to start negotiations."

Another idea Palestinians are considering is for Abbas to pair the Security Council letter with a bid at the U.N. General Assembly, where it is expected to have overwhelming support.

A "yes" vote in the General Assembly - where only a majority vote would be needed - could afford Palestinians with the status of "permanent observer," similar to the position the Vatican currently holds.

A vote in their favor would be all but assured, meaning they could pursue legal actions against Israel, though analysts suggest that an elevated status could prematurely raise expectations for change in the region.

The Palestinian territories currently have "observer" status, meaning delegates can speak in the General Assembly but not vote.

The Palestinian official said that while Abbas is committed to bringing the Palestinian bid for statehood before the Security Council, he is leaving the door open to compromise.

"We don't need to see a vote right away," the official said. He added that while an immediate vote may not be necessary, Abbas was not interested in postponing the vote as a "delaying tactic," but rather to give negotiations a chance.

"We see this as the beginning of a process," the official said.

Even senior Israeli officials were warm to the idea, saying that while they were not thrilled with Abbas going to the Security Council at all, avoiding a vote and preventing the Palestinians from unilaterally gaining statehood through the U.N. system was the main priority.

"From our side, I think we could accept it," one senior official said. The official said submitting the letter without a vote would give the parties time to begin negotiations before a decision had to be taken. He also said Abbas might feel more confident to meet Israel at the negotiating table without preconditions because he had the letter in the Council hanging over Israel's head.

"If he did this, it would be a good move," another senior Israeli official said. "He could walk away with the pride of having gone to the Security Council, having an improved terms of reference in a Quartet statement and maybe saving his relationship with the Obama administration. But I don't know if he will do it."

Despite the ideas talking shape, U.S. and European officials said it was too early to know what Abbas would do on Friday and suggested even Abbas himself may not know.

Clinton told reporters Monday the United States is engaged in "intensive ongoing diplomacy" and is talking with all sides to seek a compromise. She said even though there have already been "an enormous number of meetings," it was early in the week and there were still several days left to come up with a solution.

"No matter what does or doesn't happen this week it will not produce the kind of outcome that everyone is hoping for," she said. "So we're going to stay very much engaged and focused."