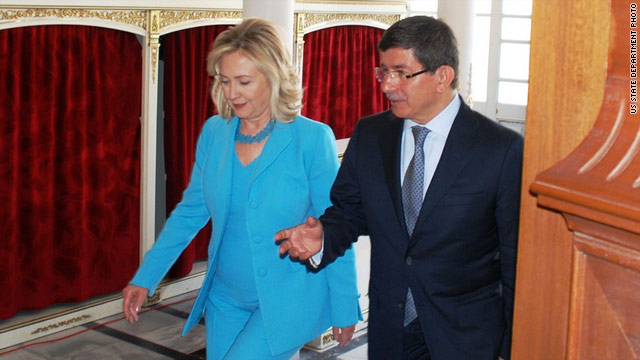 Secretary of State Hillary Clinton Monday urged Turkey not to close the door on mending fences with Israel, amid deteriorating relations between the two countries.

"We want to see them repair their relationship," a senior US official said after the meeting. "She encouraged Turkey to keep the door open."

The official was not authorized to speak on the record about sensitive diplomatic discussions.

Clinton encouraged the Turks "to avoid any steps that would close that door and on the contrary to actively seek ways that they can repair (their) important relationship with Israel," the official said

Turkey has downgraded relations with Israel over Israel's refusal to apologize or pay compensation for eight slain Turks and one Turkish-American. The humanitarian workers and activists were shot dead by Israeli commandos in a botched 2010 raid on an aid convoy that was trying to bust Israel's sea blockade of Gaza.

The US has voiced strong concern about the rift between two of its close allies in the region and Clinton has been urging both sides to resolve their differences in calls with Israeli and Turkish leaders in recent months.