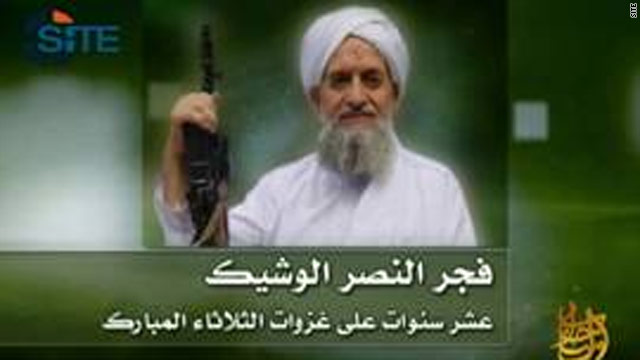 He argues that the Egyptian military council that has replaced Mubarak cannot be trusted. In other statements recently, he has said Egypt’s new rulers are slaves to the United States and will abide by Egypt’s peace treaty with Israel. It’s a consistent theme in his messages – that Washington is trying to replace one with dictator with another.

In June he appealed to the people of Yemen, where al Qaeda’s affiliate is flourishing. “I urge them not to be fooled by the tricks of politics and the GCC [Gulf Co-operation Council] American agents who want to abort their blessed revolution so they can simply replace one tyrant with another, and have another American crony running the country.”

Zawahiri is clearly making an effort to tap into popular themes in Egypt, such as widespread resentment of Egypt’s peace treaty with Israel. In one of his messages earlier this year, Zawahiri exclaimed: “It is not rational that tens of thousands of Israeli tourists enter Sinai without a visa in order to practice adultery, while our families in Gaza are not allowed entry into Egypt except through tearing souls apart.”

He also praises the recent bombings of gas pipelines in Egypt’s Sinai desert which supply Israel and Jordan. It’s unclear who was responsible for those bombings. The Sinai is a lawless area where Bedouin groups have often challenged the authority of the state, but Egyptian officials in the area have recently spoken about al Qaeda cells being active in coastal areas not far from the Israeli border.

Al Qaeda’s rationale appears to be that volatility in the Arab world, and the dismantling of authoritarian regimes and ruthless intelligence services, gives Salafist groups room to breathe. Zawahiri alludes to this in his newest statement when he comments: “The blessed Arab uprising has liberated the Arab people from the handcuffs of fear and terror. ….[It] has liberated thousands of the members of the Islamic movement’s prisoners, who were imprisoned by direct orders from America.”

And contrary to all the available evidence, Zawahiri has called the Syrian regime a “partner of America in the war on Islam.”

Not surprisingly the new Director of the CIA, General David Petraeus, and the Director of National Intelligence, James Clapper, offer a different perspective. At a Congressional hearing Tuesday, Petraeus said the nature of the Arab uprisings had discredited al Qaeda’s narrative – they were popular movements that had nothing to do with violence and extremism. Clapper said the Arab Spring had marginalized al Qaeda’s message.

“al Qaeda is sort of in the position to catch the train after it already left the station, because what has happened because of the Arab spring is not consistent with [what] al Qaeda is advocating,” Clapper said.

Ever since the first protests erupted in Tunisia last December, al Qaeda has struggled to find ways to exploit the Arab unrest.

In February, a leading al Qaeda ideologue – Attiya Allah – wrote that the revolutions were not the "perfections for which we hoped." Allah said he hoped that a post-dictator era would give al Qaeda greater freedom to proselytize in the Middle East but admitted it had no "magic wand" to provide the necessary manpower to overturn governments in the Middle East.

Al Qaeda and its associated groups have since sought to rewrite modern history. The Brigades of Abdullah Azzam last month claimed that fighters from al Qaeda and other groups had provided the spark for the Arab revolutions. Zawahiri, more vocal this year than ever before, is trying hard to claim that history is still on al Qaeda’s side.

Leave a Reply to Game Trick