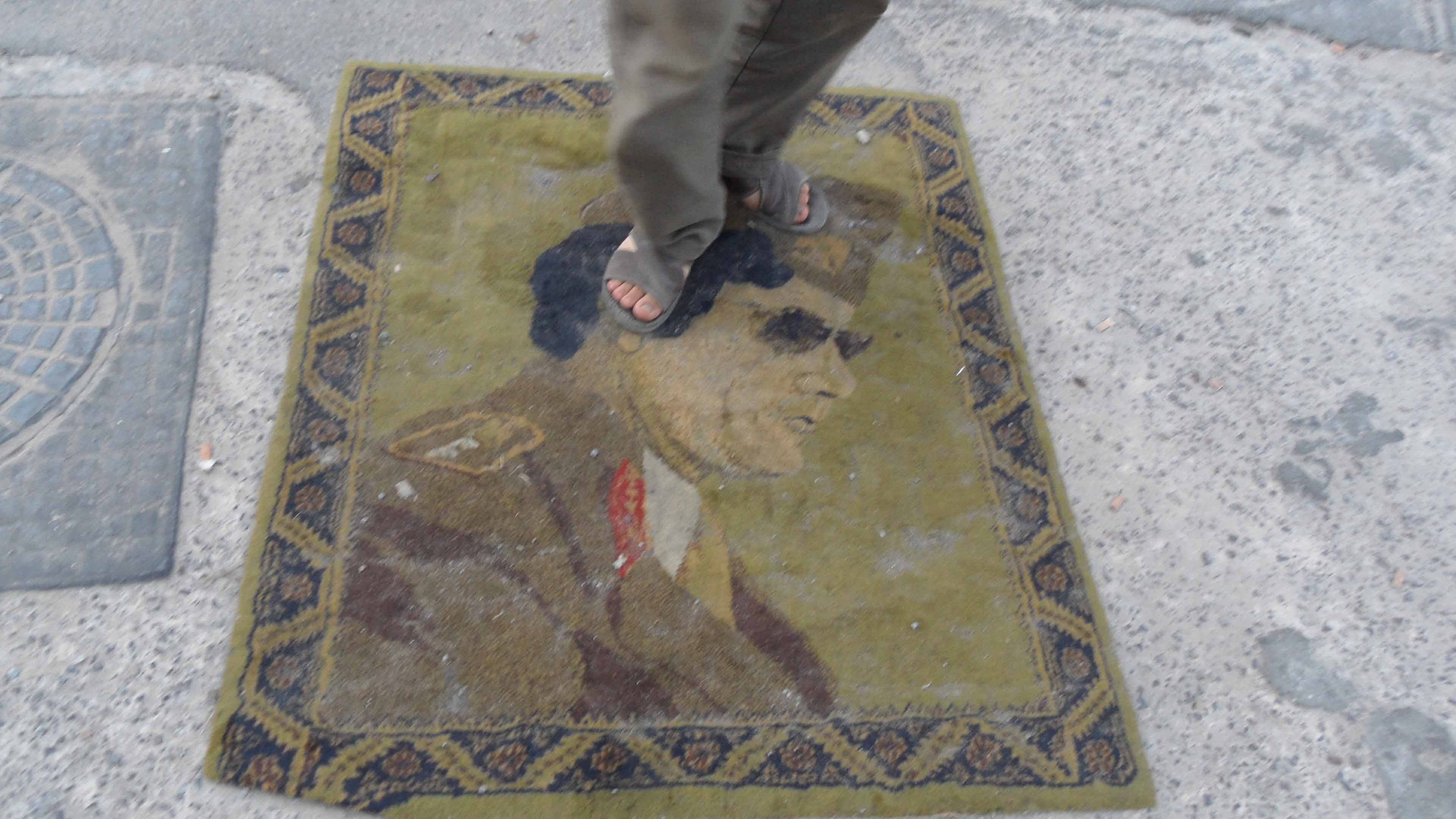 A man steps on rug placed outside government building in Tripoli, Libya in Sept 2011. It was put there deliberately to insult Gadhafi's image. Source: CNN/Jill Dougherty
September 10th, 2011
10:16 AM ET

It’s been almost three weeks since anti-Gadhafi forces captured Tripoli - but don’t tell that to the young people hanging out of car windows, clutching the black, red and green Libyan rebel flag, honking horns, chanting, laughing and singing in a stream of slow-moving traffic clogging the Corniche, the road that winds along the waterfront in the Libyan capital.

It’s almost midnight and red tracer bullets streak into the sky illuminated by a full moon. Young men with black, red and green headbands fire Kalashnikovs into the air. Down the esplanade, anti-aircraft guns let loose. The cacophony is deafening.

Stray bullets have killed some residents of the capital. In the hotel that houses most of the foreign media, the Radisson, a shell dropping from the sky injured a local journalist. But the celebrating doesn’t stop.

A cottage industry is fast at work, Libyans sewing their new flag - actually the pre-Gadhafi banner - at home, hanging it everywhere: from the minarets of mosques, from corner grocery stores, down the side of tall buildings in the capital. Entrepreneurial Tunisians just over the border are manufacturing armbands, necklaces and other branded paraphernalia and shipping it in to sell to eager Libyans, some of whom have supported the revolution from the beginning, others who are quickly seeing the wisdom of jumping on the winning team.

At the ubiquitous highway and road rebel checkpoints guarded by young men with guns, sunglasses and a lot of swagger, scowls melt when they see foreign media, replaced by v-for-victory hand signs and happy shouts of “Welcome to Free Libya!”

The man who ruled this country for 42 years, Moammar Gadhafi, still is in hiding and two sons, Saif al-Islam and Saadi, remain at large. Rebel troops assail one of the last loyalist strongholds, Bani Walid, where Saif is believed to be hiding.

Yet, incredibly, it seems not to matter right now, at least in the capital and in rebel-held cities and towns. People can talk freely, express whatever political views they have. Invaiably, these days, they claim to support the revolution. Gadhafi insiders who conducted themselves with impunity, assured of their superiority over average Libyans without connections, are out of power. Look in the eyes of many people and you’ll see it:  euphoric incredulity as they try to comprehend how quickly the regime crumbled.

The National Transitional Council, the anti-Gadhafi forces’ political wing, still must create an interim government and hold new elections. Already there is political infighting. Creating political structures in a country where politics was dominated by the will of one man will be the greatest test of these new leaders.

No matter where you go in Tripoli, you see it right outside at the entrance to almost any building:  a rug, a picture, a poster with the face of Moammar Gadhafi placed strategically on the floor so that you are forced to step on it when you enter, each step gradually erasing the memory of the man many Libyans thought would rule their country forever.