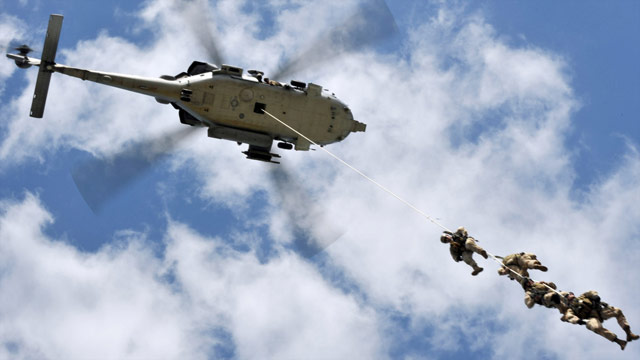 Editor's note: Jim LeMay is the CNN Weekend Managing editor. He is from a long established military family with six relatives currently serving in the U.S. armed forces around the world. He is a graduate of the New Mexico Military Institute and worked as a news videographer in a number of war-torn countries. He currently serves with the Georgia State Defense Force on a search and rescue team and volunteers his time at Fort Stewart, Georgia.

They were among 30 U.S. troops killed when a helicopter went down this weekend in the most deadly single incident for American forces since the Afghan war began nearly 10 years ago. More than 1,500 U.S. servicemen and women have died in the conflict.  Each of these deaths is every bit as tragic as what happened Saturday.

What sets this incident apart is the combat role of the SEALs and the esteem in which they are held, especially in military circles.

The embedding of  journalists in fighting units has put a face on this war and brought the solider experience home - but the SEALs, who specialize in covert operations, don't allow embedded journalists.

So look at it this way: What if we had lost 22 NFL players with half of them being Heisman trophy winners? Or think if we had lost 22 major league baseball players? There's a direct correlation because professional athletes are good examples of the kind of elite status bestowed on the SEALs.

The training a SEAL member goes through is intensive. The U.S. spends millions of dollars per man to keep them in top physical and mental shape.

Hollywood has romanticized SEALs as beer-swilling, skirt-chasing killers - but the reality is very different. For the most part, SEALs are family men with a lot to live for. Given the covert nature of their jobs, when they're back home, they remain low key and stay out of the spotlight. They're under constant scrutiny for security reasons and must pass a stringent vetting process to keep their secret clearances' intact.

One thing they all seem to posses is an undying love for country and the willingness to sacrifice their lives for their fellow team member and the mission. They run at high speed and are known to do multiple missions every day they're in country. They are not the point of the spear - they are the spear. Constant training makes them experts in every combat discipline from the highly technical to hand-to-hand combat.

Stealth is their nature; You can't just pluck another soldier out of line and replace a fallen SEAL.

This loss will be felt for years. We are unlikely to see the suffering of their families and colleagues. When a loved one is a SEAL, your life changes forever.

Family members must remain silent about their loved ones - they can never reveal details.

Just simple questions like, "Where's Tom?" have to be answered carefully.

Families must remain low-key as well, doing their best not to draw unwanted attention. It's only now, after their untimely deaths that you will hear from the extended families.

To get a visual idea of what their pain will look like; line up 22 pairs of boots or put 22 folded flags in a row. Perhaps then, you will begin to sense the loss.

At Coronado Naval Air station in California and at the SEAL base in Norfolk, Va. - rest assured the impact of this loss is just starting to sink in.