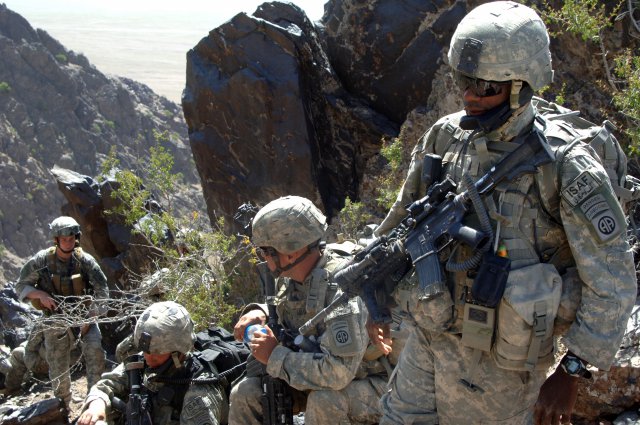 US Army soldiers on patrol in Afghanistan. Beginning in 2012, soldiers' deployments in Afghanistan will be reduced to 9 months. (US Army Photo)
August 5th, 2011
02:10 PM ET

Army to reduce deployment time in warzone to nine months

WASHINGTON (CNN) – The Army announced Friday that it will reduce the typical soldier’s deployment time in Afghanistan from one year to nine months. It’s a move that could help soldiers better deal with stress and help reduce family problems at home.

“The reduced deployment length will improve soldier and family quality of life while continuing to meet operational requirements and is an important step in sustaining the all-volunteer-force,” Army Secretary John McHugh said in a statement released Friday afternoon.

The length of deployments has been a focus of concern for years at the Pentagon. When then Secretary of Defense Robert Gates announced in 2007 that Army deployments in Iraq had been extended to 15 months, he called the decision difficult. Since then, the typical soldier’s deployment has been set again at 12 months, until Friday’s announcement.

Numerous studies have looked at the impact of long, repeated deployments for troops. In 2009, Gen. Peter Chiarelli testified in a Senate hearing that we’re dealing with a tired and stressed force, and the effect, in the most extreme cases, has been, unfortunately, an increased incidence of suicide.”

Chiarelli is the Army’s Vice Chief of Staff and the point man for the Army on issues related to mental health and suicide prevention.

“I and the other senior leaders of the Army recognize that we must find ways to relieve some of this stress, particularly the stress caused by deployments and frequent lengthy periods of separation,” Chiarelli said.

Repeated long deployments also have been blamed for an increase in divorce among soldiers and increased anxiety among their children.

The new policy goes into effect by April 2012. Any soldiers who are currently deployed or will deploy before the new year, will still have to serve a 12 month deployment.

It will not apply to soldiers serving overseas in places like South Korea or Germany. And it will not apply to Marines, sailors or airmen. In fact, it won’t even apply to all soldiers. Army Special Forces soldiers already serve shorter deployments but they serve in much more hostile environments and they deploy more frequently.