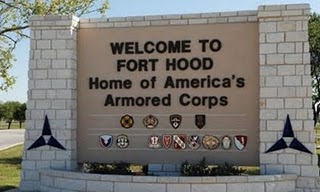 Sign outside Ft. Hood. An AWOL soldier was arrested near the base Thursday with materials that could be used to make a bomb. (File Photo)
July 28th, 2011
12:25 PM ET

(CNN) - FBI agents discovered a bevy of potential bomb-making materials in the hotel room of a missing Muslim American soldier who was arrested near Fort Hood, Texas, the military base where a 2009 shooting spree killed 13 people, an FBI spokesman said Thursday.

He is expected to face federal charges, possibly as early as Thursday afternoon, a federal law enforcement official said.

Killeen police received a call from a gun shop owner about a suspicious man in the store who was asking questions about .40-caliber ammunition and then bought three boxes of 12-gauge ammunition and a magazine for a pistol, a defense official said.

He paid cash, took a cab to a surplus store and allegedly bought a military uniform, the official said.

A statement on the Fort Hood website acknowledged Abdo's arrest but said it had no connection to the base.

"We are aware at this time that Killeen Police Department arrested a soldier yesterday. The incident leading to the arrest did not occur on Fort Hood and the soldier was not a Fort Hood based soldier," the statement said.

Spokesman Chris Haug said base officials have no indication that Abdo ever tried to get onto Fort Hood between the time he went missing and the time of his arrest.

Abdo was assigned to Fort Campbell in Kentucky

Abdo, who joined the infantry in 2009, refused to deploy to Iraq on grounds of his religion and had put in the paperwork to be discharged as a conscientious objector. The Army approved his request, but on May 13, he was charged with possession of child pornography on his computer, a U.S. military official said.

At a June 15 hearing, Abdo was recommended for court martial, the official said. He went AWOL almost immediately after that.

In an interview last year, Abdo said he refused to deploy to Iraq because he was a Muslim and had to remain true to his faith.

Another Muslim soldier, Maj. Nidal Hasan, could face the death penalty as the prime suspect in the 2009 shooting spree at Fort Hood.

Witnesses at a preliminary hearing identified Hasan as the man who walked calmly through a medical building on the country's largest military base, shooting and frequently reloading his handgun as he shouted "Allah Akbar," which means "God is great" in Arabic.