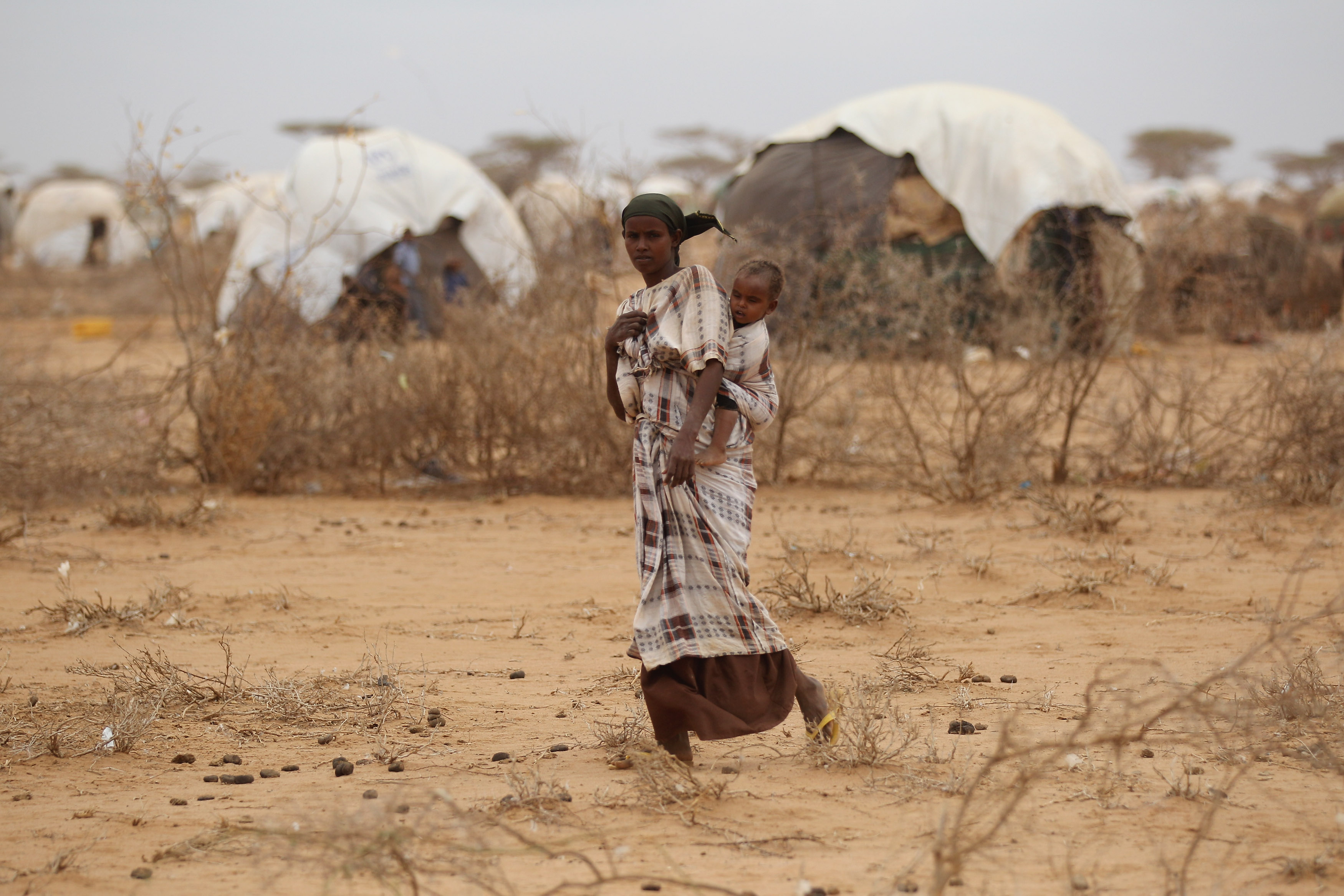 U.S. musters response to 'staggering hunger' in Horn of Africa

The drought, officials say, is the most severe in 60 years and is expected to get worse, pushing many more families into desperate searches for food and protection.

In a briefing at the State Department, Ambassador Johnnie Carson, U.S. assistant secretary for African affairs, said the drought has generated "extraordinary flows of refugees across thousands of miles of East Africa."

Carson said in Kenya an estimated 3.6 million people have been affected. Millions more are suffering in Djibouti, Ethiopia and Somalia.

Hundreds of thousands of Somali refugees already are in Kenya and Ethiopia and "new arrivals are coming in staggering daily rates," Carson said. Many of them are suffering from life-threatening malnutrition, he said, and there are many more in need in Eritrea, where a repressive regime is refusing to provide data on the humanitarian needs of its people.

Carson said the militant Islamic Somali terrorist organization, Al-Shabaab, is "wrecking havoc "and has "clearly made the current situation much worse" by prohibiting, since January, 2010, humanitarian workers and organizations from operating in areas it controls.

Somalia has a very weak central government that controls little of the country.

"We have seen the recent reports that Al-Shabaab claims that it will finally allow international humanitarian aid get to areas under its control," Carson said. "We are consulting with international organizations that have worked in these areas to verify if there has been any real change in Al-Shabaab's policies that would allow us and others to operate freely and without taxation imposed for humanitarian deliveries."

Asked whether U.S. economic sanctions on those associated with Al-Shabaab are worsening the situation, Carson said "U.S. sanctions are not the issue...the issue and the problem is Al-Shabaab."

Reuben Brigety, principal deputy assistant secretary of the Bureau of Population, Refugees and Migration, who just returned from visiting refugee camps in Kenya and Ethiopia, told reporters the department has heard "troubling" reports that that 3,200 new refugees per day are streaming into camps in Ethiopia and Kenya and that number could rise even higher as the situation in Somalia grows more desperate.

USAID's deputy administrator, Donald Steinberg, said U.S. officials have "witnessed the sight of families tumbling into the camps and receiving the first nutritional meals in months." Many, he said, have walked for a week to 10 days through deserts, a situation he called "heart-wrenching."

USAID's Famine Relief Warning System Network, Steinberg said, which has been monitoring the drought and dwindling food supplies, "predicted this crisis" and in August 2010, it started pre-positioning supplies in Djibouti, South Africa and other areas near the crisis region.

Since October of last year, the U.S. government has provided assistance to 4.1 million refugees, a total of $383 million dollars in emergency food and water, health care and hygiene supplies, Steinberg said, including 348,000 metric tons of food.

On a longer-term basis, Ambassador Carson said the State Department and USAID are working with the international community, including implementing a long-term "Feed the Future" program aimed at increasing agricultural productivity.

USAID Administrator Rajiv Shah was on a one-day trip to visit crisis-affected communities in northern Kenya (Wajir and the Ifo camp within the Dadaab complex.)

Steinberg will travel to London Wednesday to coordinate with international donors who will be discussing what further steps can be taken to provide emergency as well as long-term assistance to Africans affected by the disaster.