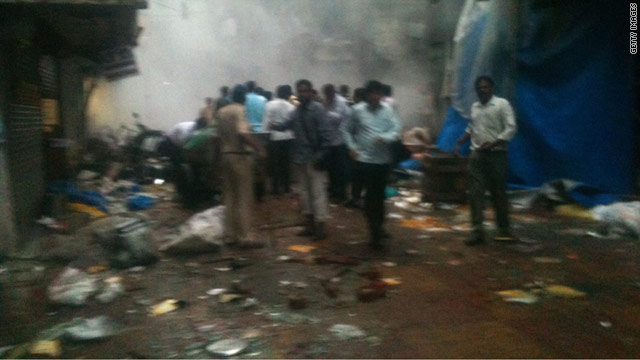 Aftermath of three coordinated blasts at the Opera House in the diamond district of Mumbai, India. Photo by: CNN
July 13th, 2011
04:28 PM ET

US closely monitoring attack in Mumbai

The United States is offering its “full support and assistance” to India in the aftermath of the triple bombing in Mumbai the State Department said Wednesday.

At the daily State Department briefing, Deputy spokesperson Mark Toner said Undersecretary for Political Affairs William Burns had spoken with Indian Foreign Secretary Nirupama Rao to offer the condolences of the American people and to offer support. There had not yet been an official request for assistance from the Indian government Toner added the United States was unaware of any American citizens having been injured or killed in the attack.

U.S. national security officials were closely monitoring the situation in Mumbai U.S. officials told CNN. One official said there are a number of potential suspects, but it is too early to tell who is behind the attacks.

“It’s far too early to speculate,” Toner said when pressed on whether there were any indications of Pakistan’s involvement in the attacks. “The Indian government will no doubt begin an investigation of this incident and we will wait for the results and as I said we stand ready to cooperate with them,” he said.

President Barack Obama issued a statement condemning the attacks and said the U. S. “will offer support to India’s efforts to bring the perpetrators of these terrible crimes to justice.”

Secretary of State Clinton is scheduled to travel New Delhi and Chennai, India next week, but her spokesman said there were no plans to alter her travel plans at this point. Clinton “will have an opportunity to re-affirm our commitment to the U.S.-India partnership when she travels there next week,” Toner said.

Mumbai was the site of multiple attacks on luxury hotels, a train station, and a Jewish cultural center in the city in November 2008 in which more than 160 people were killed including six Americans. The United States has blamed Lashkar-e-Tayyiba, a militant group based in Pakistan, for those attacks.

Get the latest CNN reporting on the Mumbai blasts