Unemployed? Don't count on the military

WASHINGTON (CNN) - Friday's government report showing a rise in unemployment shines a light on a new hurdle facing young people in need of work: the military isn't the reliable source of employment that it used to be. The Army and Marine Corps are getting smaller, and now there's a nearly year-long wait list just to get into boot camp, no matter which branch you want to join.

The shrinking Army and Marine Corps are part of a long-planned reduction in the size of our Armed Forces.

But the backlog for enlistees is a new issue. Incoming recruits will spend quite a bit of time before they see a Pentagon paycheck. "Some may take a year or slightly longer, the typical new enlistee would probably be somewhere between 9 and 11 months," Pentagon spokeswoman Cynthia Smith said in an email response to CNN's questions about recruiting.
END_OF_DOCUMENT_TOKEN_TO_BE_REPLACED

President Obama has announced plans to start bringing home U.S. troops in Afghanistan. But come this fall, it will be a full decade the country’s been at war. CNN’s Pentagon Correspondent, Barbara Starr has a special report on how innovations from 10 years at war are changing your health care at home.

For a special look at "Battlefield Breakthroughs: Helping at Home," tune in to "Sanjay Gupta, M.D.," this Saturday-Sunday 7:30 a.m. ET

Amid continuing tensions between the U.S. and China, Joint Chiefs Chairman Admiral Mike Mullen is heading to Beijing, the Pentagon confirmed Friday.

His visit comes after reports of a possible new U.S. Navy exercise with Japan in the South China Sea, set for Saturday, that could spark new criticism from Beijing.

Pentagon spokesman Col. Dave Lapan said Mullen would discuss a wide range of security issues when he meets with Chinese officials, including Chief of the General Staff of the People’s Liberation Army Chen Bingde’s, who visited Washington in May.

Mullen is also expected to visit units of the Chinese army, mirroring what he showed Chen at U.S. military facilities.
END_OF_DOCUMENT_TOKEN_TO_BE_REPLACED

The large slice of the global military spending pie, shared by the United States and its allies, will get significantly smaller by 2015, according to a report by a leading think tank.

Spending by the U.S., NATO, Japan, South Korea, Israel, and Saudi Arabia, dropped to 72% of the world’s military spending in 2010. Although still maintaining the largest chunk of global spending, that number is set to plunge further to 66% by 2015, the Council on Foreign Relations says.

The U.S. contribution to the pie has also dwindled over the past five years, due to faster foreign growth, and “in the absence of a new sense of insecurity,” the report predicts this trend is likely to continue.
END_OF_DOCUMENT_TOKEN_TO_BE_REPLACED

Massive Syrian demonstrations – US and French envoys in Hama to express solidarity with anti-govt. protests

How a Syrian teenager was tortured to death

U.S. officials are increasingly confident that one of the most-wanted terrorists in the world was killed early last month in a drone attack in Pakistan. 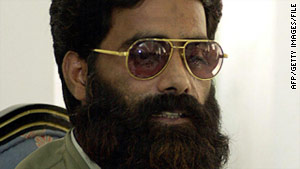 Most-wanted terrorist Ilyas Kashmiri has been declared dead before, only to resurface.

Ilyas Kashmiri was a senior figure in al Qaeda and operated his own terrorist group, Harakat-ul-Jihad-Islami (Movement for an Islamic Holy War).

One senior U.S. official said they were "99% sure" that the drone attack - on a remote location in the tribal territory of South Waziristan in Pakistan - had eliminated Kashmiri. But the official added that "the folks that make that determination aren't ready to say so definitively."

Another official said there was "strong reason to believe that he's dead" but would not elaborate.

One reason for caution is that the shadowy Kashmiri was once before declared dead, only to resurface and give an interview that threatened "Mumbai-style" attacks in the West. END_OF_DOCUMENT_TOKEN_TO_BE_REPLACED