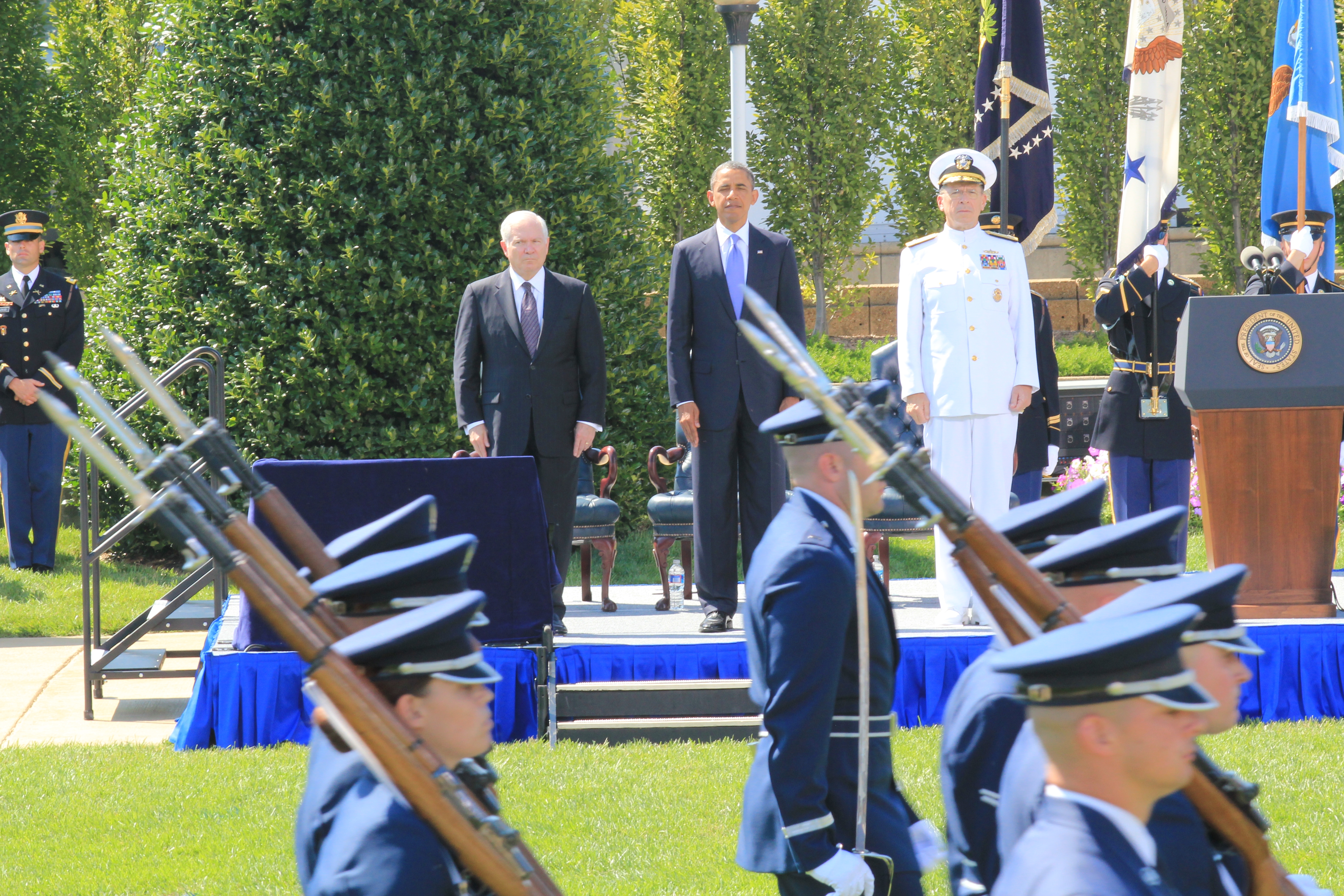 Gate's promise to his wife was a not so subtle reference to his track record of leaving Washington and then reluctantly coming back or staying longer than planned. Today he’s really leaving—for his retirement home across the country in Washington state.

Most recently, as the President George W. Bush's second term was ending, Gates made several comments about having a clock in his office counting down the days until he could leave Washington when Bush left office.

But after President Obama persuaded him to stay, he said he threw the clock away. He became the first Secretary of Defense to serve presidents of both parties, and Obama said Thursday "it's clear you have been one of the best."

The Department of Defense displayed a surplus of pomp and circumstance for the ceremony on the Parade ground just outside the Secretary's office windows.

On the day before, crews were busy power-washing the stone stairs that Gates and company would use to come and go from the ceremony. And the various military honor guard units were busy rehearsing the precise marching and drills for the ceremony.

Each of the Armed Services sent honor guard units and flag bearers to the event. The Army sent its "Pershing's Own" band as well as its Old Guard Fife and Drum Corps in their colonial-era uniforms, compete with white wigs and three-corner hats.

Of course some things are out of the U.S. military's control.

The heat of a blazing sun was mitigated only by a frequent breeze and unseasonably low humidity. Still one member of the U.S. Army Band, apparently feeling the effects of the sun as she stood there in her blue wool tunic calmly stepped out of formation, walked to the one corner of the parade ground with any shade and sat down. By the end of the event she was back on her feet and appeared fine. (Note to the U.S. Navy, today is perfect example of why your tradition of wearing lightweight, cotton/polyester blend all white uniforms on hot days is very smart move.)

Then there were the planes, passenger jets taking off every minute or so from Reagan National Airport and flying right over the parade ground. While the 19-gun salute could be heard over the noise– the roar of the engines frequently drowned out the President, Secretary Gates and even the officer who read the official citation for the Presidential Medal of Freedom that President Obama awarded Gates in the one surprise event of the day.

Gates purposely tried keep from becoming emotional, choosing to send the troops in the field a heartfelt farewell Wednesday by email. But he still took time to remember them as he left office. "I will think of these young warriors – the ones who fought, the ones who keep on fighting, the ones who never made it back – till the end of my days," Gates said.

Perhaps the feelings of the people who have worked under Gates for four and a half years was best summed up by a civilian DoD bureaucrat sitting in the heat at Thursday's ceremony. "I'm gonna miss this guy" the worker said. His friend seemed to agree.