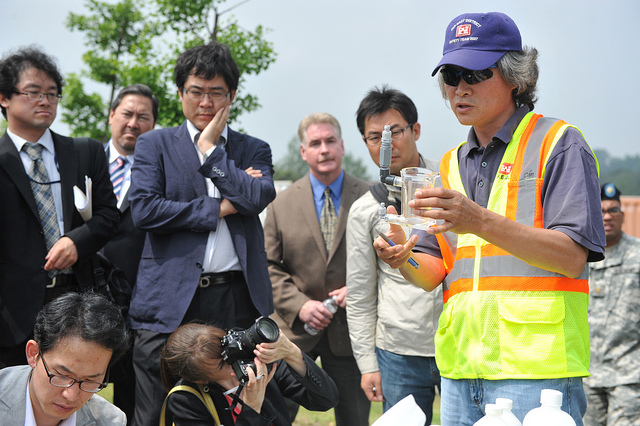 No traces of Agent Orange were detected in tests of ground water near a U.S. military base in South Korea, the U.S. Eighth Army announced Friday.

In May, Phoenix, Arizona television station KPHO reported that some veterans claimed they buried barrels of Agent Orange on Camp Carroll in South Korea in the late 1970s.

Agent Orange is best known as a herbicide used by the U.S. military during the Vietnam war to make it harder for enemy forces to hide in the dense jungles of Southeast Asia.

The Veterans Affairs Department's web site says that exposure to Agent Orange is responsible for some kinds of cancers, diabetes, Parkinson's disease and many other diseases among Vietnam vets.

The testing on the wells near Camp Carroll is just one part of the investigation into claims that Agent Orange was buried in South Korea. The joint U.S./South Korean investigation team is using ground penetrating radar, electrical resistivity and magnetometers to examine the site where the barrels of Agent Orange were allegedly buried.

A statement from the Eighth Army released Friday said, "To date, no evidence of Agent Orange has been discovered on Camp Carroll or in the surrounding community."

The statement said the Eighth Army's commander, Lt. Gen. John Johnson has been meeting with Korean officials to keep them up to date on the investigation.

"I promise that I will do everything necessary to determine the truth," Johnson said in the statement. "My focus is to ensure there is no risk to the health of the people on Camp Carroll or off Camp Carroll. And it there is, I'll fix it."