Powerful. Popular. Able to leap between campaign battles and diplomatic landmines in a single pantsuit. 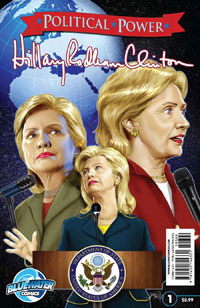 The latest modern-day comic book hero is none other than Secretary of State Hillary Clinton, who is being profiled in a new political comic, "Political Power: Hillary Clinton."

The comic is the latest in a series of profiles published by Bluewater Productions which have featured a diverse group of personalities ranging from President Barack Obama to Lady Gaga.

The 32-page unauthorized comic book is not the first time Clinton has been immortalized in a graphic novel. Clinton was also part of Bluewater's "Female Force" series, which also includes Michelle Obama, Sarah Palin and Clinton's predecessor atop the State Department, Condoleezza Rice. The 2009 Clinton comic sold 20,000 copies, Bluewater said.

The new issue chronicles the events that lead her to become secretary of state, including her eventual support for Obama's presidential campaign to the detractors of her nomination to her confirmation.

Jerome Maida, the writer of the Clinton comic, calls his portrayal of the former first lady a "fair and realistic" one, but he also "makes clear his respect for the secretary of state."

"I am writing Hillary Clinton from a perspective of someone who did not admire her at first and throughout the process of research has come to admire and be utterly fascinated by what is a tale that most have not reported on," he says.

"It's a fascinating story," Maida says.

Hopefully Bluewater will publish a sequel of Hillary on the road, featuring the journalists who travel with her. It would be cool to be a comic book character.   My partner CNN Foreign Affairs Correspondent Jill Dougherty and I would make a mean news-hunting team for the "Female Force."