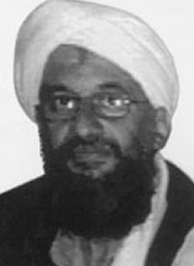 By the 1990s, he again refocused his attention on undermining and attacking the Egyptian government and, eventually, the U.S.

The FBI is offering a $25 million reward for information leading to his capture - the same as the reward for bin Laden - reflecting al-Zawahiri's importance to the United States.

Paul Cruickshank, a CNN terrorism analyst, said: "Of all al Qaeda's senior leaders, al-Zawahiri is probably the one in most jeopardy. Western intelligence officers have told us that in recent times bin Laden and al-Zawahiri were probably in relatively close geographic proximity and also in touch to some degree, so all this information may help America track down al-Zawahiri."